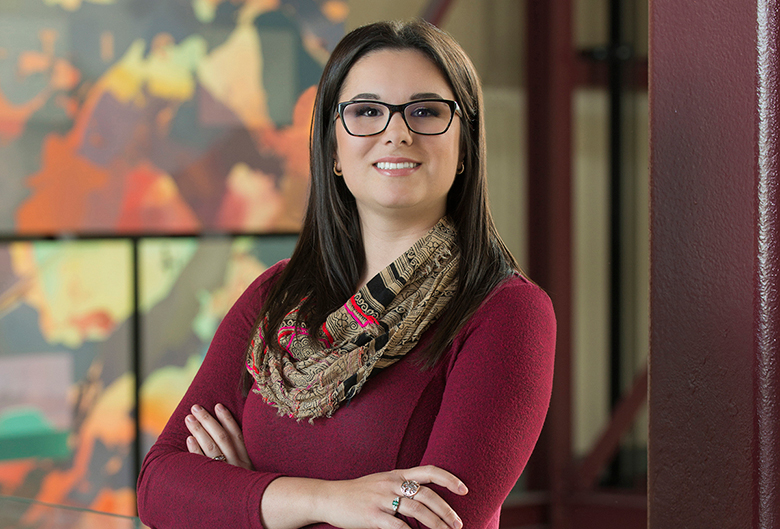 Janna Olynick is an incredible example of what the University of Northern British Columbia (UNBC) has done for the North. She came to UNBC in 2010 to study Psychology and earned both undergrad and graduate degrees, in turn teaching the fundamentals of psychology to all new students.

Janna holds a Master of Science and a Bachelor of Science in Psychology and has four years of work experience in related fields. She holds the Tri-Council Policy Statement (TCPS 2: CORE) ethics certificate and became a member of the Golden Key Society during her Bachelors.

“She’s made many conference presentations, and has had her name published in dozens of papers,” said one supporter. “[Janna] has overcome some incredible barriers to succeed and is giving back to her community immeasurably through volunteer work.”

In 2015, Janna was awarded the Canadian Chairs of Departments of Psychology Award and in 2016, won the BC Psychological Association Gold Medal Award. She has three academic journal publications and has authorship on thirteen published reports and ten conference presentations. Additionally, Janna operates a research business.

“My research (e.g., RRN2 project, Strengthening Families Program, POWERPLAY) involves a high level of data and research acumen,” said Janna. “My goal is to contribute to the cultivation of knowledge and resources to strengthen northern and rural communities. From quality research comes valid data, which promotes better decisions and prosperous/healthy communities.”

Janna was the Academic Vice President of the PSYC Club, organizing guest speakers and growing the scholarship fund, as well as a representative for the Graduate Student Society. She also sat on the Innovation and Development Common Research Days Advisory Committee and was invited to speak at the UNBC 2017 orientation.

Prince George is home to a vibrant arts scene that includes the @tworiversgallery 🎨 Stop by to view exhibits of work from artists across Canada or browse their gift shop, or register for a class on their website.

Head to @ristrettocoffeehouse.pg @themakeriepg @theopendoorcafe.pg @houseofancestorscafe @lobbycoffeepg and @coljuicery to try out their pumpkin spice inspired drinks and treats and find out how to take part in the first ever Prince George Pumpkin Spice Latte Festival!

Who’s ready for some delicious food truck eats at the Farmers’ Market this Saturday? @legendaryjohns is one of the many options regularly available at the market for food lovers! They won’t be at the market tomorrow due to a catering commitment, but there will be plenty of other tasty eats for you to try and make sure to look for them at future markets.

Are you a bigger fan of visiting Livingston Springs in the summer or the winter?

The @pgbcne is back! Head to the fairground from noon today through Sunday to hop on rides, munch on yummy food, play some games, and visit cute animals. See you there!

Have you checked out the Bubble House west of Prince George at the @woodhouseranch yet? We highly recommend it 👌

Have you tried @glazeddoughnutspg yet? If not, you can check them out at Rooftop Rock before they head back to Wilson Square Farmers’ Market on August 14th.

Those flowers and clouds. That view 💞

Did you make it to Downtown Summerfest Saturday’s over the weekend? The theme this past Saturday was Dogs Downtown 🐶 We spotted some pretty cute dogs but this one was beyond adorable!

One of our favourite streets in Prince George 🌳💚

It’s almost the weekend, which means the Farmers’ Market and Downtown a Summerfest Saturday’s are almost here again. What will you be picking up at the market this weekend?

When’s the last time you went for a walk along the red cedars in The Ancient Forest?

Events are back! Check out the link to our blog page in our bio to find out what’s going on for the summer of 2021. Keep an eye on this blog as we'll be updating it with new events throughout the summer.

Mayor Lyn Hall had proclaimed the week of July 4 to 10, 2021 “Pride Week” in Prince George! 🌈 Mr. PG is proudly holding the Pride flag to make the week and Prince George Pride has planned a number of events this week. Check out their Facebook page for details.

One of the things we love most about summer in #PrinceGeorgeBC is Yoga in the Park, hosted by @chinookyoga. How are you moving your body this summer?

Love the calm after a storm ⛈

Now here’s an idea for surviving the heatwave ☀️🙌

These are drool 🤤 worthy any day, but on a day like today, they’re 🙌 Beat the heat by stopping by @trenchbrewing for one of these slushies or any local cafe to pick up a cool beverage.

What are your plans during the gorgeous weather we’re having? Planning to get outside or relax on a patio?

Have you checked out the newest hot spot for baked goods in #PrinceGeorgeBC? If you haven’t, make sure you arrive at Daydream Donuts 🍩 Cafe early as their delicious creations get snapped up quickly!!

This little gem is just under a two hour drive from #PrinceGeorgeBC. Have you checked our #greerfalls before? Which waterfalls in the region are on your bucket list to see this summer?

#PrinceGeorgeBC offers great access to so many amazing outdoor activities, including Home Lake near #Vanderhoof.

We’d love to hear about your favourite adventure spots and what you got up to over the weekend!

How stunning is this shot?! 😍🌅

Overcast days make for beauty shots like this one 🤍 How do you spend a rainy day?

The days are getting warmer, which means summer is almost here. ☀️

As we continue to stay local and avoid unnecessary travel, it’s important to remember many of our favourite businesses have taken a massive financial hit over the past year-and-a-half.

Our latest blog lists six ways you can support local businesses this summer to help make sure they stay open. Link is in our bio!

If you love art, you’ll want to stop by the only commercial art gallery in #PrinceGeorgeBC. @aesthete_fine_arts opened recently and showcases beautiful works of art from across Canada and elsewhere.

Sometimes that sunset glow hits just right. Evening hikes can lead to the most beautiful views 😍🌅

Where will this week take you?

No matter what your outdoor activity or sport of choice, there's likely a club or user group in #PrinceGeorgeBC ready to support you!

Check out the latest blog on our website for all the deets. Link is in our bio!

Have you checked out any of the new patios popping up along sidewalks and parking lots around town? Love the vibe of this one @nancyospg.

Spring is finally in the air. What trails are your looking forward to hiking 🥾 in #princegeorgebc?

Looks like the perfect day for some sangria on a patio. Has anyone checked out the new rooftop patio at @theblackcloverpg?

I case you didn’t catch the #northernlights the other day. This has to be one of our favourite pictures we’ve seen! 👌😍

The new Fire 🔥 Hall #1 sure looks sparkly at night. And check out that reflection👌

We might be done with the snow, but the snow ❄️ isn’t done with us yet. Here’s looking forward to warmer temperatures next week!

Wondering which patios are open for service while dining-in is not allowed?

We've done the research for you and put together a list of patios that are open and soon to open along with other ways you can support local restaurants, pubs, and cafes.

The link to this blog is in our bio. Did we miss a patio? Let us know in the comments!

We love a good spring sunset reflecting off a lake 😍

Spring is officially here and the snow is melting! Looking back on the winter, what was your favourite local adventure?