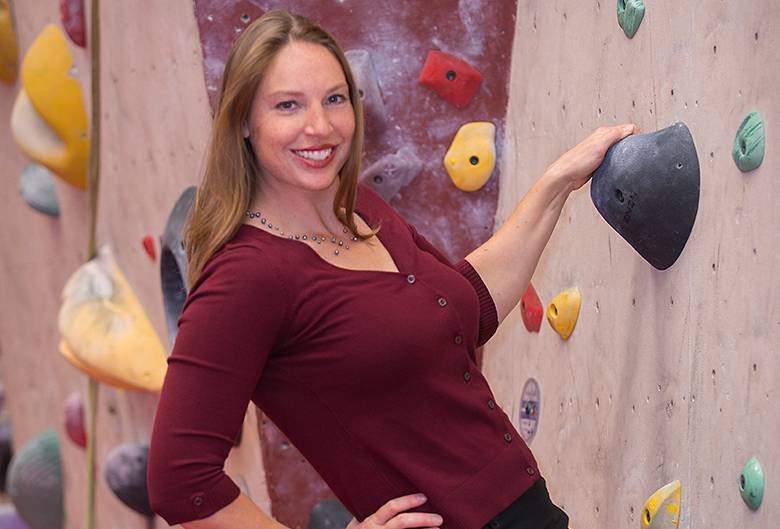 Nestled in a wing of the Prince George Golf and Curling building sits OVERhang Education Centre; there you’ll find its shepherd, Lauren Phillips. Lauren is the co-owner, an outdoor safety professional and someone who loves adventure, mentorship, and facilitation. Her company delivers courses and workshops in outdoor safety and adventure across BC and Alberta, including avalanche awareness (Avalanche Safety Training-1), swiftwater rescue, ice safety, ATV, and snowmobile operation, wilderness first aid, and GPS use. The facility is also an indoor climbing gym and fitness centre that opened in October 2013.

“Due to her leadership, it has been a huge success,” one supporter claims. “As the OVERhang owner and general manager, Lauren manages over twenty employees and a number of contract instructors. In her free time, Lauren is also a Team Leader, Instructor, and Searcher for PG Search and Rescue.”

Lauren earned a Bachelor of Science in Forestry at the University of British Columbia in 2004. Later, she worked in the industrial sector, followed by government, still practicing forestry while advising her husband’s business, Nahanni Construction. She became a registered professional forester in 2006 and instructed at the University of Northern British Columbia (UNBC) in 2014 and 2015. She was the founding director of the Throwdown Adventure Festival Society, a director/ signing officer for Tourism PG in 2017, and a past director for PG Search & Rescue (PGSAR), the latter being an instructor, training officer, media representative, and was recently selected for the Class D Fixed Line helicopter rescue team.

Lauren loves mentoring others, taking great joy from instructing adults and youths. She’s passionate about gardening and feels the most at peace when outdoors in the mountains, on a rock face, or paddling a river. “I’ve finally been able to spend time enjoying my own outdoor recreation again,” says Lauren, “as well as traveling, after five extremely taxing years launching OVERhang.”