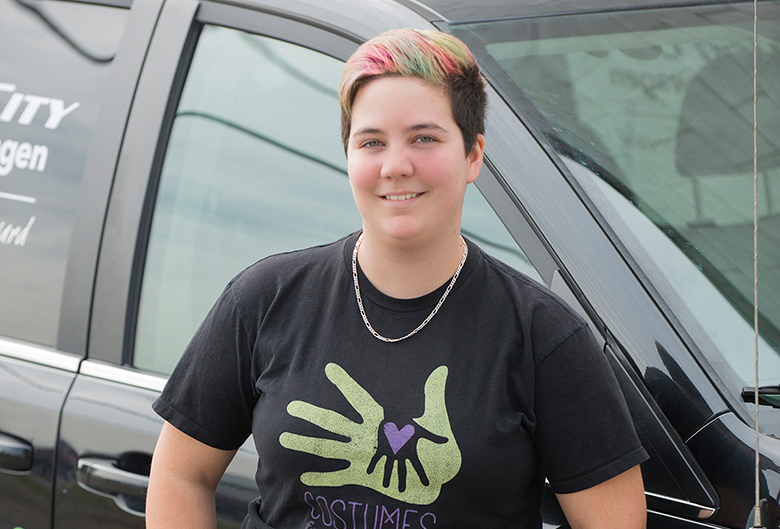 Renee Conway
Owner
Costumes for a Cause
Age: 28

Two years ago, Renee and her wife started a non-profit called Costumes for a Cause with a mission to serve Prince George and the surrounding communities. Built from the ground up, the two created an organization that has helped countless people, spread hundreds of smiles, raised thousands of dollars, and visited many sick and dying children as far as Vancouver with their character costumes. There is no such thing as a day off, spending every waking moment answering emails, calls, and Facebook messages. Weekends are packed with birthday parties, compensated only by donations in hopes of raising funds for more birthday parties. All of the time invested into CFAC is unpaid, and yet, it grows larger every day.

“Renee has built a solid foundation for a business that continues to expand,” says one supporter, “including to travel to other communities, and spread more happiness across Prince George. There’s nothing CFAC can’t do, which also involves training a new puppy to become a therapy dog.”

Coming from Ontario, Renee has made Prince George her home, and continues to show her love for this city. She has been involved with several local events through CFAC, as well as through her passion for music. If you can’t find her in a costume putting smiles on people’s face, you’ll find her at an open mic, the farmers market, or a cafe.

Since CFAC’s founding, Renee and her wife have been nominated for two Chamber of Commerce Business Excellence Awards (in the community impact category) and have become a registered incorporated society. Renee also owns a janitorial company and is currently in the works of taking ownership of a food service company. She has always had a passion for business, and a desire for doing it with no monetary help. Renee is one of the hardest working, caring, and giving people, one could ever meet.