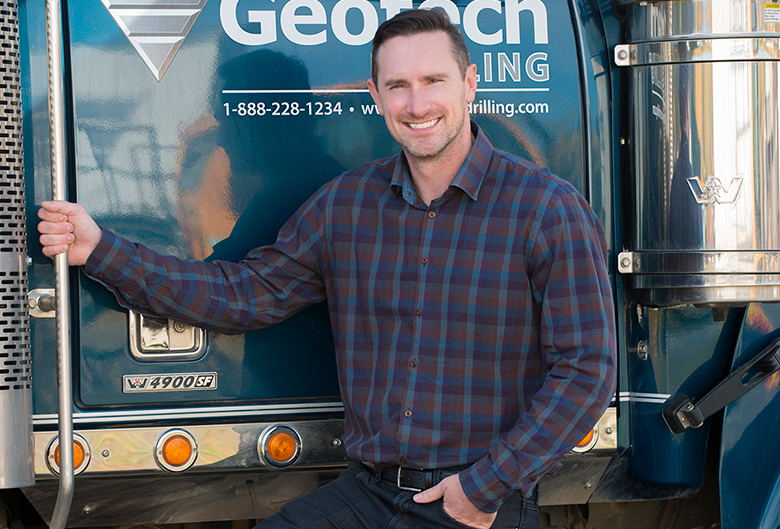 He started out as a drill assistant in 2001 when Geotech was just a few years old; now Ryan Samis is the Vice President of Operations at Geotech Drilling Services Ltd. The company began around a kitchen table in College Heights the year Ryan arrived from Alberta in 1996. Ryan quickly rose up the ranks, becoming a driller, supervisor, and successfully growing the exploration division of the company from 2008 until he became manager of the entire department in 2011. He then moved into a senior management role in 2015. Ryan has invested in his future with Geotech, becoming a shareholder in 2012.

Ryan has orchestrated all aspects of Geotech’s most significant projects, including tendering, project preparation, purchasing, logistics/operations, human resources, invoicing, and client relations. He has worked on, overseen and led drilling programs throughout Western Canada, the Canadian Arctic, US, South America, and more recently, West Africa.

“I have expanded the exploration division of our company since 2008 (Exploration Division Manager) from four drills to our current fleet of twenty,” says Ryan. “My expanded role currently manages all sectors of the business and international operations, overseeing eight project managers.”

Further to his role at Geotech, Ryan also sits as the President of the Canadian Diamond Drilling Association (CDDA) and has been a member of the board of directors with the CDDA since 2014, chairing the Technical Committee within the group.

“My career advancement has been largely tied to my return to Prince George,” Ryan adds. “I worked in our Okanagan division for six years and returned in 2009. Being based here at our corporate office has allowed my experience to grow exponentially, allowing me to sit in my current position with confidence. I have my peers and community to thank for that.”