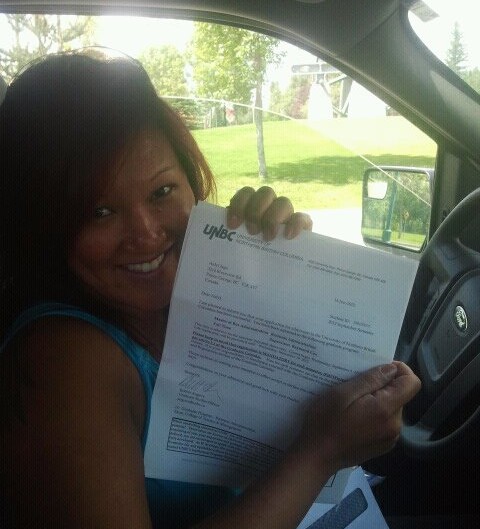 If you check out my LinkedIn profile, you might notice that my designation of “SAHM” is missing from my Experience and Education sections. I obtained this distinguished designation almost five years ago, and I am, to this day, continuing my education and honing my craft (arts and crafts?). For those who may not frequent parenting blogs and discussion boards, SAHM stands for “Stay At Home Mom.” 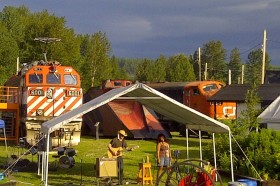 My “job” as a SAHM in Prince George began when our daughter was 16 months old, when we moved here from Colorado where my husband had been working as a geologist. My daughter and I spent a few months discovering the great things that Prince George had to offer those with young children, such as The Exploration Place, the Railway and Forestry Museum, the YMCA, the recently renamed Lheidli T’enneh Memorial Park, and the Aquatic Centre, to name a few. All fantastic things, to be sure… but I was ready to shake things up.

One day, I happened upon ad in the local paper for the University of Northern British Columbia’s Master of Business Administration program. I had toyed with the idea of doing an MBA for many years (I had built a career as a music copyright administrator in Toronto and Vancouver in a former life), but there never seemed to be a good time and it just never seemed logistically feasible. At U of T, Ryerson, UBC or SFU, I’d just be a random student number on a lengthy class list – those schools just feel so huge and impersonal, which is just not the right learning environment for me at this point in my life. However… with one of Canada’s highest ranked small universities basically in my backyard, perhaps it could be done. With UNBC centrally located (it is pretty much 15 minutes away from everything in Prince George) and so easily accessible (traffic is pretty much non-existent and parking at UNBC dirt cheap), it finally seemed possible to get this MBA thing happening, with the possibility of family/school/life balance.

So, I applied in the spring of 2012, and by August 2012, I was a full-time university student again, 15 years after completing my undergraduate degree (see the photo of me opening my acceptance letter in the parking lot of the Exploration Place – that was a very happy moment!).

I can say first-hand that UNBC lived up to its reputation of offering high quality graduate-level curriculum and instruction, an intimate learning environment due to smaller class sizes, and a diverse and friendly student culture. The MBA program, in particular, was extremely beneficial to my goal of becoming a more knowledgeable and capable businessperson, one who is ready to advance to an Executive-level career path, after being a Manager for several years and hitting the “ceiling.” It also opened up a network of amazing local business people – my classmates were managers from all sectors of the northern BC business landscape: healthcare, government, oil and gas, forestry, surveying, engineering, banking, retail, education, construction… the list goes on. Having a background in nonprofit arts management, I was able to contribute a unique perspective to this diverse group.

My MBA goal was thrown a curve ball when I got 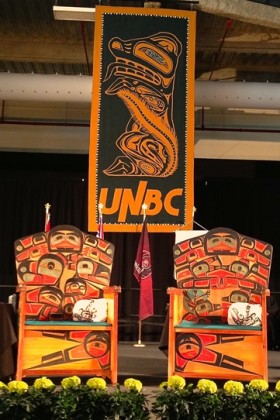 pregnant with our second child near the end of my first year of the program. Undaunted, I attended class and completed my assignments right up until my due date, and I was shown so much support and care from my professors, the administrative staff, and my classmates at UNBC. That closeness and trust you easily develop with your peers is not unique to the environment at UNBC – it’s a Prince George thing. Here in Prince George, I have found that the greater community is like extended family – there is a certain familiarity and camaraderie that doesn’t take long to set in.

So, here I am, in June 2015, a new graduate of the University of Northern British Columbia. The convocation ceremony was lovely; there is so much culture and tradition innate in all things at UNBC. Now, don’t get me wrong, completing a Masters degree with two small kids at home was no easy feat, but I can say with great certainty that I was only able to accomplish this goal because I live in Prince George, where we have this exceptional university on our doorstep, and an amazing community to support this kind of an endeavor. 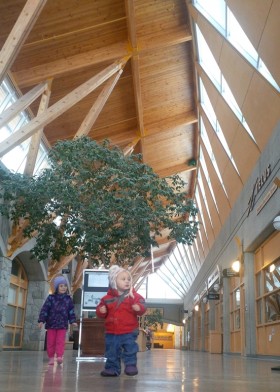 On a side note, I’ve also been so fortunate that UNBC has a truly outstanding daycare and preschool on campus, where my soon-to-be five-year-old daughter has been attending the preschool for the past two years. This has been a fun experience to share with her, as we are both 2015 UNBC grads (she starts kindergarten in September)!

And on a funny closing note – when I was pregnant with our second child, whenever anyone asked my then three-year-old daughter what her little brother’s name was going to be, she would reply assuredly, “Prince George!” Well, the name stuck, and the little fella’s middle name is officially George.

The city of Prince George, and UNBC, will always hold a special place my heart and in our family’s history.