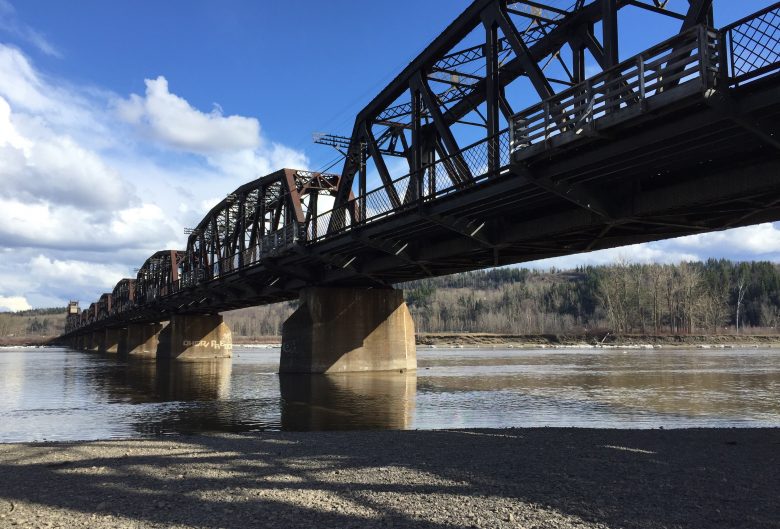 An ode to our iconic bridge

It’s hard to miss the CN Rail Bridge spanning the Fraser River into Prince George, just south of the confluence of the Nechako and Fraser Rivers.

For more than a century, this 800 metre-long steel truss and concrete bridge has connected Prince George to other communities. It’s both an imposing and welcoming sight for visitors to the city. It’s a critical piece of infrastructure for the continent’s rail links.

If you want to know more about the bridge’s history, I’d recommend a feature in the Prince George Citizen newspaper by local historian Jeff Elder. It’s also important to learn about the displacement of the Lheidli T’enneh First Nation from their village site when the Grand Trunk Pacific Railway arrived in the early 20th century.

For now, I’ll tell you why this bridge holds special meaning for me. 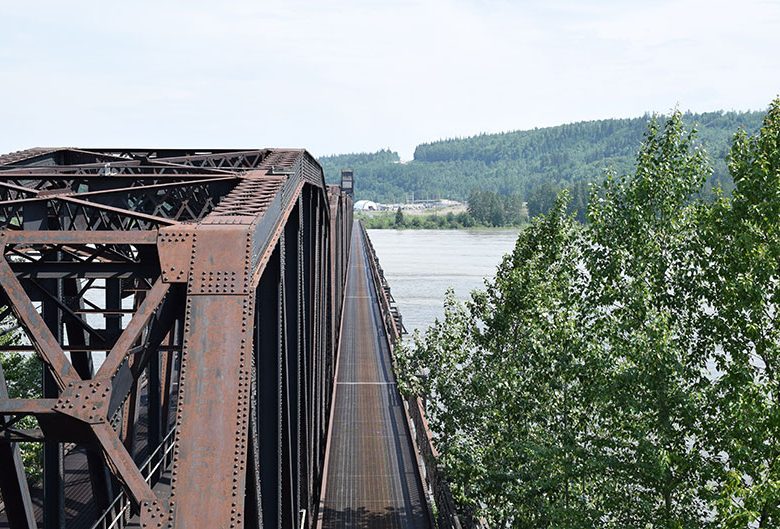 The CN Rail Bridge was a towering sight when I was young. It usually marked a family trip east… whether it was cross-country skiing at Tabor Mountain, or heading to the Robson Valley or Alberta. Those were the “old days” when the bridge carried trains through its main span and vehicles on decks cantilevered from its structure.

The bridge intimidated me at first. Maybe it was the towering black structure, and its lift span that seemed frozen in time. Perhaps it was the eerie sound of rubber tires on the metal car deck, the hum resonating as we drove across.

From the bridge deck, the Fraser River seemed close enough to touch. In the winter, I often watched ice flows on the dark water as we ventured to points east. I always felt too close for comfort to the rail line. We drove parallel to the CN trains across the bridge, and crossed several former BC Rail tracks at its east bank.

I felt small compared to this bridge and the massive machinery on and around it.

In the late 1980s, a new Fraser River Bridge for Highway 16 took shape just downstream of the CN Rail Bridge. The new span left the original for trains only. This new bridge offers drivers wide lanes, separation from trains, and an expansive view of the old bridge. Even so, I missed travelling across the old bridge.

But concrete and steel don’t go away, and new experiences can grow from old. The development of the Heritage River Trail in the late 1980s cut a path beneath the old and new bridges, linking Cottonwood Island and Lheidli T’enneh parks.

One can’t walk or cycle on the CN Rail Bridge, given the need to stay well away from trains. Nevertheless, it has become quite the experience travelling under the span as a CN freight train rumbles just metres overhead. 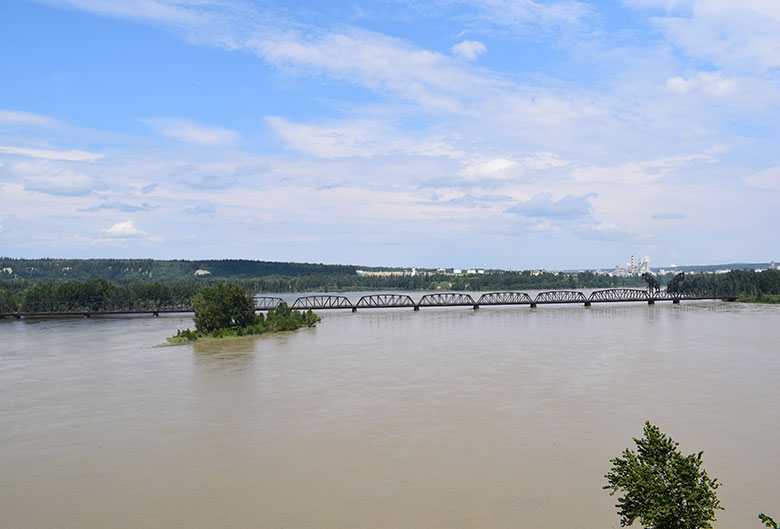 A reintroduction and welcome

As I returned to BC in 2020, the bridge became a renewed favourite place for me and my spouse. I enjoyed adding the Heritage River Trail and its path under the bridges to my running routes.

My spouse Sarah recalled the rail and vehicle bridges of her hometown of Bracebridge Ontario, with their multiple spans over the Muskoka River. The historic CN Bridge provided familiarity as she began to enjoy her adopted home community.

Even as its role has changed, the bridge withstands the passage of time and seasons. I remember an uncle’s photo of the bridge during high water levels in the spring of 1990. The bridge stood firm as the Fraser River nearly lapped at its deck.

In the fall, the low water level of the Fraser reveals an opposite setting. People can carefully walk several hundred metres along the dried riverbank, and even touch the bridge’s concrete piers. It is an other-worldly landscape of river stone, often punctuated by magnificent yellow autumn leaves and blues skies.

The CN Bridge may no longer be the key gateway to our community that it once was, but it definitely maintains its iconic status. It’s a critical feature of our region’s transportation infrastructure, and is part of a rail network spanning the continent. It’s a key landmark at a key landmark… the confluence of two rivers. It is a widely-recognized symbol and a prized photo opportunity.

For some of us, it’s also been a source of stability as we’ve grown, changed, moved away, and returned. Iconic structures can build countless personal connections.

About the Author: Mark was born and raised in Prince George. He has happily “boomeranged” to the city following adventures in Victoria, Metro Vancouver, and Ontario’s Waterloo Region. Mark is currently the Executive Director of Marketing and Communications for the College of New Caledonia. His spouse Sarah and their greyhound Lenny are enjoying life in Prince George.