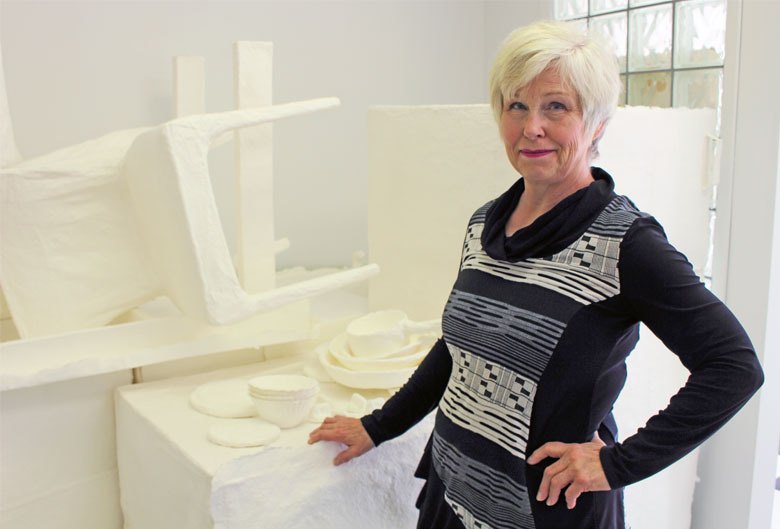 Forestry was woven into the fabric of Susan Barton-Tait’s life at a young age, but it was only once she moved to Prince George that her early exposure to the paper making process ignited a spark in her for transforming wood pulp into handmade paper that she uses to cast objects.

Susan was born in Dalhousie, New Brunswick where her father was an engineer employed by the Canadian International Paper Company. Her father was transferred to forestry based towns all over Eastern Canada, leading her to gain a very good understanding of the paper making process. Many people brought up in towns reliant on the forest industry might have sought a career in a mill, but Susan was drawn down a different path.

Her math studies in university attracted her to weaving as she considers it a very digital form of art, which aligns it with her numeric interests. The problem with weaving for Susan was that it’s very two-dimensional; her desire to create three-dimensional art led her to take on felting. After working with wool for many years, she attended the Banff Centre School of Fine Arts and became entranced with making paper.

I sat down with Susan to discover how she ended up in Prince George and to talk about how her career as a professional artist has evolved over the years. Read on to find out how she transforms forestry products into art.

What brought you to Prince George?

“My husband took a job with the University of Northern British Columbia about 14 years ago. I was an artist in Winnipeg where we had lived for many years and I took everything out of my studio and brought it here.”

Tell me about your early days as an artist in Prince George. 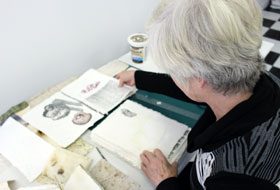 “I set-up a big studio on 4th Avenue in downtown Prince George; it was in a warehouse building that had no doors on the inside. On one side it was all auto repair guys and they had no idea what I was doing. At that time I was making very large sheets of paper to make the exterior of a house. I’d hang them up on these wires and I’d put up plastic across my doorway and every once in a while they’d come around and pull across the plastic and they’d look in and they’d go ‘Oh my gosh’ and close the plastic and leave. But then the roof leaked and it isn’t good if you’re making handmade paper, so I had to leave that space. I found a wonderful space higher up 4th Avenue that was a storefront and it had windows and I’ve never had a studio with windows. I was just thrilled to see the sunlight coming in.”

You’ve weaved, felted and created numerous other forms of fibre art. Can you tell me about your current focus on paper?

“Moths are endemic to wool and I had a terrible problem with moths. Paper is the same process as making felt, but it doesn’t attract bugs and you can transform it. I like to build three-dimensional objects and I discovered you can cast paper over things and it will take on the shape of whatever you cast it on. You can make anything you want. I started with casting a whole bunch of objects I had received through my grandmother’s and great-grandmother’s estate; just boxes of little bits and old dresses they had worn. Then I just explored how to cast. I took kitchen appliances and I cast an entire kitchen and then the whole house.”

How has your exposure to paper mills at a young age influenced your work? 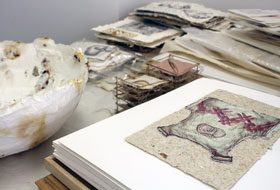 “I grew up in paper mill towns and paper has always been a part of my life. My father was an engineer for the Canadian International Paper Company and he got transferred a lot. I lived in Dalhousie a few times. I lived in Gatineau, Quebec three times and in the 60s, it had the largest paper mill in the world. My dad brought home large sheets of paper; he had them cut paper for us and we had them all over our walls. As a kid, they made up the basement so that we always had paper to draw on. And he would bring home stacks and stacks of beautifully cut newsprint and I would take it to school and I’d draw all day. I knew all about the pulp and paper industry because he’d have industry people come to the house and we’d have dinner and I knew how everything worked.

When my husband said to me he had applied for a job here and I said ‘Where is Prince George?’, which I guess is the usual state of affairs for people who haven’t been here, and I said oh, a paper mill town and I said I guess I can handle that as I sort of know the mentality of a paper mill town. It’s in my blood and I think when I got here I was quite surprised that paper isn’t the predominant part of the city anymore.”

What do you like most about working with paper and casting?

“What I like is, especially when I work with clothing, is that the casting has probably retained a bit of sweat marks and dirt, even though you don’t see it. You cast it and anything that was in the original object comes out and into the paper and I just find that the most fascinating thing. And sometimes with buttons and things I put in, they rust and the rust migrates into the paper.”

Where do you source your materials? 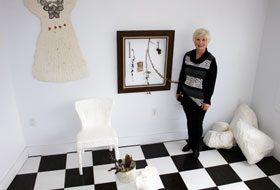 “Since I moved to Prince George, I source my pulp from Northwood Pulp Mill. Many artists who work in paper making will not use wood pulp because it’s not an art product, and yet, this wood pulp is the best pulp I’ve ever used. I had some of it stored and didn’t realize that it was wet and had it in a bucket that was sealed for four years and I found this bucket and I opened it and it was perfect. It had not moulded. It was the most neutral pulp I had ever had. It was unbelievable. It’s really easy to work with and it’s highly accessible; it would be very sad if I didn’t have access to it.”

What do you do with the castings you create?

“Because I do large installations, I think of them as ephemeral and very transitory, so they can go. So generally I just keep one small piece of a previous exhibition and the rest of it just goes out the door.”

Can you describe the opportunities for artists living in Prince George or ones who are thinking of moving to the city?

“There is a lot going on here, you know, there really is, and you can initiate things here very easily, which I think is a great opportunity and a good reason for living in a mid-sized city. I think it’s fabulous that you can have a studio downtown and it’s not so expensive that you can’t afford to do it if you put your mind to it. There are lots of ways you can interact with almost any business. Lots of businesses have said, well why don’t you put your art in my window? If you want to do something, you just do it. You don’t need to worry about extraneous things that sometimes a big city requires.

Visit Susan’s website to learn more about her work.