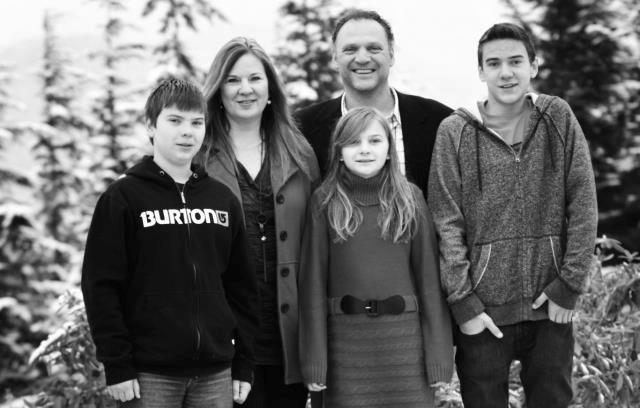 When my husband Steve visited his best friend in Prince George in February of 2006 I fully expected him to tell me how freezing cold it was and how there was not that much to do.  It was quite the opposite, actually.  He went on and on about how much fun he had:  snowmobiling, ice fishing and playing cards with a group of guys well into the night.  I began to realize how much fun and play was missing from our lives. We lived in Abbotsford and my husband was often tired from the three hours a day he would spend commuting to Vancouver. I was a stay at home mom and it was hard to make ends meet; we just did what we thought we had to do and what we saw others do as well.

A few weeks after his trip, Steve started talking about the possibility of moving to Prince George. At first I thought he was crazy. He talked about having a slower pace of life, being able to afford more than just the necessities and having more time as a family. He was also excited about being able to go camping and fishing more easily and that there were so many lakes around Prince George. I was skeptical at first, but eventually went along with it. In July of 2006, we sold our home in Abbotsford and were able to buy a beautiful home on four and a half acres in the country, just ten minutes from town. We couldn’t believe how affordable it was!

Settling in after making the move

My husband had no trouble finding work in his trade and I continued to stay at home with the kids until they were all in school full time. It was then that I decided to begin my “second act” and went back to school and got my social work degree, attending two years at the College of New Caledonia and my final two years at the University of Northern British Columbia.  I now work in my chosen field which I find incredibly rewarding.

As parents who both work, we feel we have truly achieved a work/life balance as we are able to be home well before suppertime and because of this balance, we are able to have time to pursue family fun on the weekends. Our kids are now teenagers who enjoy winter sports such as skiing and snowboarding, and we are thankful that it is something that many can do as it is both affordable and accessible. We love to camp as a family in the summertime and our freezer is still full of lake trout! We have found a sense of community not only with our neighbours but with friends we have made through our work, our church and even through our children’s sporting activities.

I never expected to love Prince George so much. My neighbour said, half joking, “Stop telling your friends how great it is here, we don’t want too many people to move here so we get rush hour traffic!”  I think Prince George has room to grow and room for a few “Lower Mainlanders” to come up and start living a balanced life like we did.