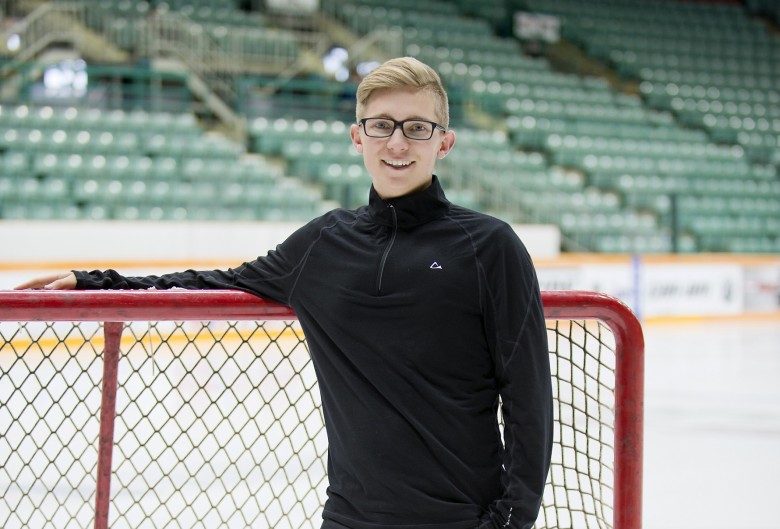 Part of the New Ice Age surrounding the resurgent business game of the Prince George Cougars is the stuff Ouellet brings to the table.

“That improved atmosphere at a Cougars game? A large degree of thanks goes to Braydon for the tireless amount of work that he’s put in to help get the CN Centre back to its glory days,” said one advocate. “His love for sports and community-based involvement is closely rivaled by his love for personal growth and business development. He is always striving to improve himself, whether it be through literature, business courses, or professional networking.”

This Renaissance man was a child of Fort Nelson but has been ensconced in Prince George since 2003. He attended Okanagan School of Business obtaining a Bachelor of Business Administration degree (Marketing major), winning a national competition for business students in the process.

During that time he started working for the Kelowna Rockets, then transitioned back to Prince George to play for the front office of his hometown Cougars. Sports is in his makeup.

“I used to race karts all over North America,” he said. “I was the 2006 Rotax Junior National Champion and represented Team Canada at the world finals in Portugal.” That culture of winning translates into his marketing and business partnership roles now, where being a champion is taken more seriously than most small businesses.

He is volunteering to coach UNBC’s team of JDC-West business student competitors. He recently took a position on the Tree of Lights organizing committee. This year he accepted an offer to sit on the board of Volunteer Prince George.  The hockey team is doing a lot to demonstrate positive outreach and respect for community in their business practices, and that has inspired Ouellet to do so personally as well.