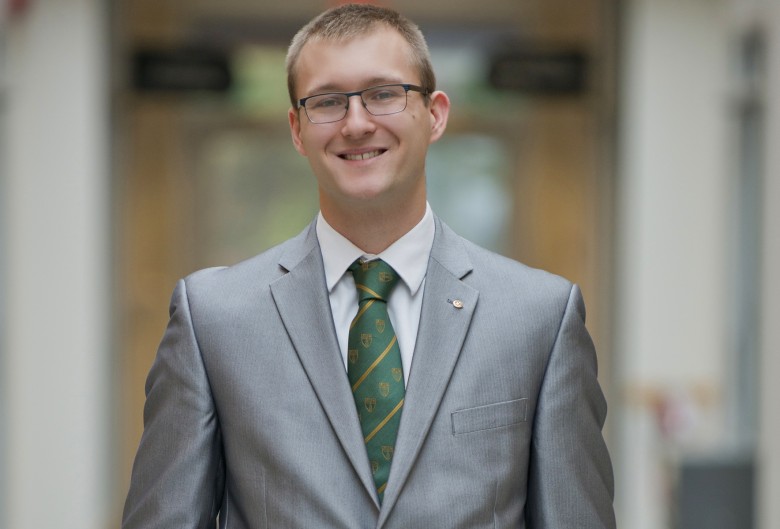 Eric Depenau believes in diving into his community headlong. He arrived in Prince George in 2013 to attend UNBC after growing up in Quesnel. Before his first year in PG was over, he already had his name in the ring for School District 57 trustee and earned impressive voter numbers despite less than a year in this community and less than 22 years on the earth at the time.

At UNBC he is completing a dual major in Political Sciences and International Studies. Before UNBC he completed two CNC programs, earning diplomas (with honours) in both Social Service Work and Arts. He also achieved certificates in Skills For Social Change and Non-Profit Management.

“It is the responsibility of today’s youth to prepare themselves to stand up and confront the challenges of tomorrow domestically and internationally,” he said. “I did not get involved in our community to fill my time. I did it to help lead positive change.”

This sense of larger service is what compelled him to enlist with the Rocky Mountain Rangers B-Company army reserve unit (vice-president of their Mess Association).

It is also why his name ends up on so many ballots. He was the youngest candidate in the past municipal election, and he was successful in student government bids to governing and academic bodies at CNC and UNBC.

Eric was on the activist’s path early. Twice he won a Quesnel Community Spirit Award, and he formed a bursary program to help the academic costs of youth from single-parent or orphan backgrounds.

He is a past Rotarian, Freemason, and Legion member, a 2015 Canada Winter Games torch bearer, volunteers with the United Nations Association, volunteers for federal and provincial political candidates, and BC Youth Parliament, and spot-volunteers for various human rights issues.

In the summers, he is a forest firefighter, and is also an award-winning poet.