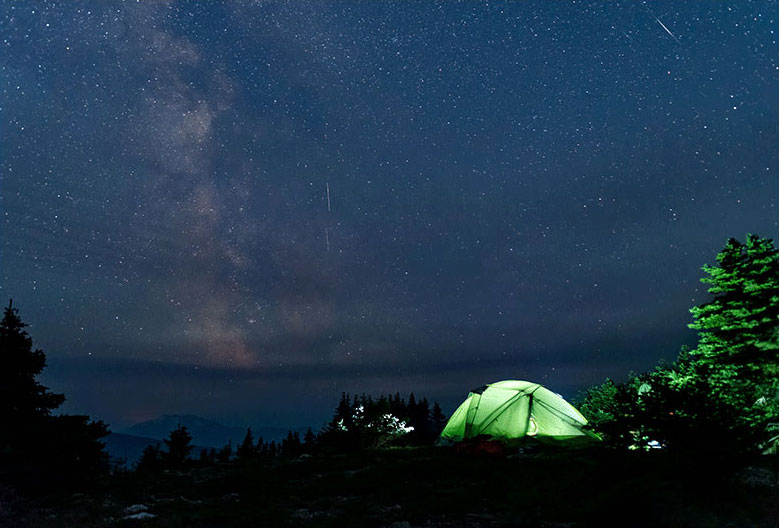 Prince George may be a mid-sized city, but we are still far enough away from the light pollution of larger centres to enjoy a star filled night within city limits. Take things a step further and drive a few kilometres outside of the city and your eyes will be mesmerized by an unimaginable number of twinkling lights. Here are four of my favourite spots to take in the night skies.

A 15 minutes’ drive north of downtown Prince George on Highway 97 and full of vast farm fields and open skies, Salmon Valley offers great views of the night sky. The Salmon River and Wright Creek run through the area and offer shores you can explore. Or take advantage of the Salmon Valley Campground and set up your tent for a night of star filled fun right on the shore of the Salmon River.

Located 40 km northwest of town is Eskers Provincial Park. Several walking trails circle multiple lakes and marshlands. This park was named for the long sinuous gravel ridges left in the meltwater channels of ancient glaciers. It is rich in wildlife and forested with varied species of trees. Away from almost everything, the lack of light pollution in this area makes for some of the most star filled skies you’ll find on a clear night.

The LC Gunn Park Trail follows along the southern cutbanks of the Fraser River and stretches between Highway 16 and Highway 97 South. Although the stars may be dimmed by the lights from the city, the views from LC Gunn are worth the journey. Stars will still be visible above the city’s skyline, giving the night sky an urban touch.

Perched above the city of Prince George on the west side, Cranbrook Hill offers uncluttered views of the sky along with some picturesque houses and old barns. Even though Cranbrook Hill is only a few kilometres drive from Prince George, it feels like country in the city.

These are just a few spots that come to mind when I plan on a night of stargazing and astrophotography. Being out under the stars in the forest takes me back to my youth and the limited light pollution of our area makes stargazing a magical experience. There are plenty of places to enjoy the stars around Prince George.

Please remember to be prepared and be careful as wild animals are more active at night. Also please respect private property and the residents around you who may not feel the same joy for staying up into the wee hours of the night.