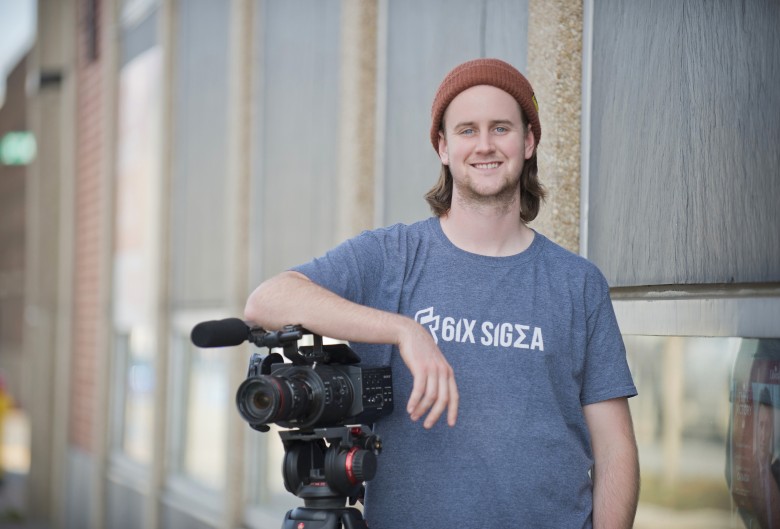 Jason Hamborg’s contributions to his community are on fast-forward.

The co-founder of 6ixSigma Productions has been filming and editing videos ever since he was 12 years old and a neighbour taught him how to use the basic software on his family’s home computer. He was barely finished his UNBC Bachelor of Commerce degree (a double major in Human Resources and General Business) before he and his partner Glenn King hit the play button on their enterprise. Two years later their efforts are reeling in the accolades as one of the most popular companies in the region for filming and editing corporate and personal videos. Sports action, the outdoors, professional settings, family functions, they are respected for all.

“Our focus has been on creating a culture of learning, teamwork and support,” Hamborg said. “It has been very gratifying to develop a team and watch our company grow.”

They now have four employees, and Hamborg is giving a hand up in other ways, too. He imparts his knowledge at the head of Project Management classes at CNC.

“I love to teach,” he said simply.

In the past he has been an active part of the university business school’s JDC-West team, and he continues with them now as a coach. He also sits on the BC Human Resource Management Association’s northern advisory council.

“I have worked with Jason on multiple projects and have been exposed firsthand to the amazing atmosphere and professionalism that he has imbedded into his company,” said a supporter. “Jason is doing fantastic things for this community.”

In the way of a true giver, his contributions are often unseen because viewers concentrate on what Jason’s cameras show.

“One of the most important things I focus on is doing our best to support community initiatives with the work we do,” he said. “6ixSigma is involved in countless video projects with non-profits throughout Prince George and the north.”