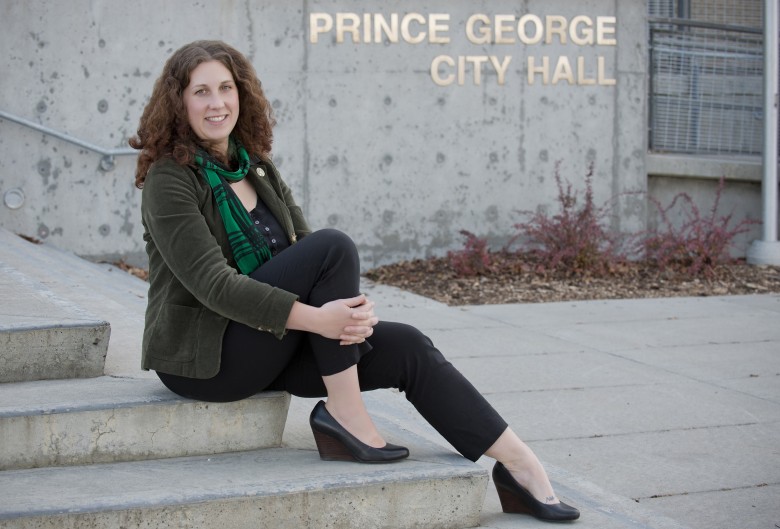 If the name Jillian Merrick was unfamiliar around Prince George one year ago, it is certainly emblazoned on the local psyche now. In November, 2014, Merrick scored enough votes to become the youngest city Councillor in known Prince George history.

How she won votes was as much a part of the story as her meteoric name recognition. It was counterpoint to the slick ads and glossy signage of typical modern electoral candidates. She demonstrated her values by posting do-it-yourself signs made of recycled wood and even yarn. She turned to social media to spread her message. With her campaign signage attached, she cycled. And cycled.

It was evident, too, that she was not just a fringe candidate. Speaking to this was her BA from UNBC in Economics and International Studies, her directorship with the Northern Undergraduate Student Society (including obtaining a Student Union building), her status as a regional expert in local agriculture operations (she spearheaded the A To Z Guide For New Northern Farmers), her work as a small business coach at Community Futures, and what’s not to respect about someone who treeplanted her way through university tuition costs?

“Leadership began at an early age,” she remembered. “I was the youngest female referee in the Sunshine Coast Minor Hockey Association. I spent a year abroad under the Rotary Youth Exchange. I was elected student body president in my final year at UNBC, and I’ve launched many community projects in Prince George like Bike To Work Week and PechaKucha PG.”

She has been a workhorse for cycling causes in the city, plus sat as a director with REAPS for the past few years. She also owns two small self-started companies: Jillenium Consulting and Plump & Juicy Garlic Co.

“Jillian being elected was no accident,” said another supporter. “It was a vote of confidence from citizens of Prince George for a fresh perspective.”