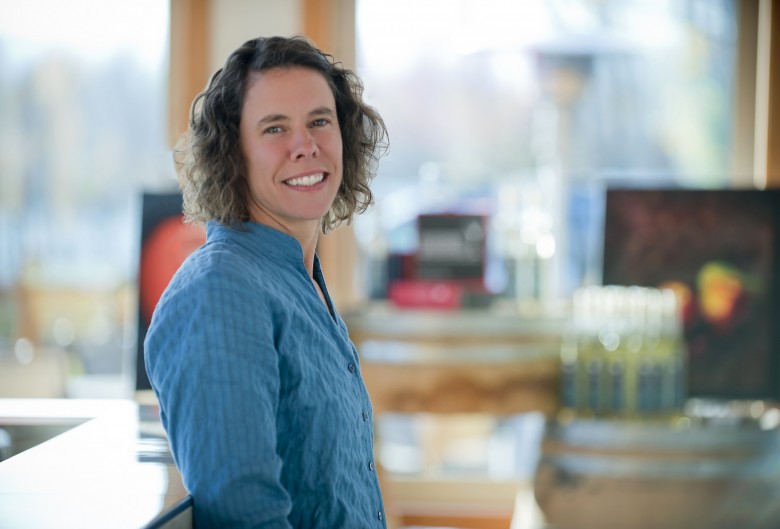 She couldn’t have imagined, when she moved to the Prince George area to be an agriculture consultant, that one day she would lead the horticulture team for the most northerly winery in Canada.

The Agriculture Science degree-holder from Laval University knew British Columbia was a diverse and exciting landscape for growing commercial crops. She worked on a number of farms in B.C. before the job of a lifetime came along – work on the startup team for the most unlikely agri-food business ever dreamed of in Prince George: a winery. Grapes are not noted for their success in this climate, so Touchette was called on by proprietors Pat and Brenda Bell and their son Doug to create a line of fruit wines.

Growers are always dabbling in creative soils. While the winery’s orchards of apple trees, rhubarb, gooseberries and other fruits, were evolving, Noémie was also sprouting another agricultural enterprise. At Northern Farm Products near Red Rock she launched a commercial garlic operation which is now distributed by Save-On-Foods.

For these two ventures, she said, “the BC Institute of Agrologists awarded me the New Growth Agrologist of the Year for northern B.C.”

Agriculture is not an instant-return kind of industry. During her patient periods, she still puts her professional skills and 16 years of experience to good public use by teaching classes in fermentation techniques.

“As a mother of two daughters, farm manager, and farm owner, my time is limited,” she said. “However, winter allows me to give some time to the French Canadian Association Cultural Committee. My native language, French, is close to my heart and I want to keep it alive in my new hometown.”

She also volunteered to help the francophone components of the 2015 Canada Winter Games, making it a gold medal year, and now Noémie’s reputation is really growing.