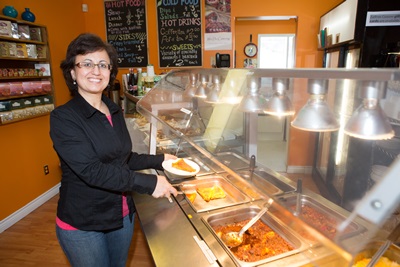 In Montreal (where I am from), one is constantly immersed in an environment of different types of food from around the world. The city’s medley of French/Italian/Jewish heritage provides many of its famous delicacies, but it is also a food haven for a variety of other cuisines, from Lebanese to Central African to South Asian, and everything in between. Given my background, I had very little idea of what to expect from a place like Prince George. Over the course of my first year here, however, its culinary diversity has blown me away.

It could have been forgiven if Prince George did not have a Persian restaurant. Iran is far geographically from Northern BC’s largest city, and the region does not attract as many Iranian immigrants as, say, the Lower Mainland or other parts of the country. But that is a moot point, as Prince George not only has one, but two restaurants serving authentic Persian fare. And lucky for me, they are both located a short walk from my apartment.

Zaffron Cuisine is set in a converted heritage house on Vancouver Street. Owner Mojegan Sadeghian had first operated a catering business out of her home, but strong demand encouraged her to move to a sit-down restaurant, and Zaffron was born. She loves being located in an old house because of the homey feel of the place, and the food complements the environment well (and vice-versa). She specializes in made-from-scratch stews which are extremely flavorful. My personal favorite is the chicken and prune stew, which she serves on a bed of rice. All the while, Mojegan never ceases to make the diner feel like they are in her home.

Shiraz Café is another gem in Prince George, and holds the title of Northern BC’s first Persian restaurant. Reza Akbari exudes pride in his restaurant, and his enthusiasm is highly contagious. If you ask him about Persian cuisine or why he decided to open Shiraz, he will surely discuss the Iranian tradition of hospitality. He has taken this practice to heart in his restaurant, where every person who walks through the door is greeted as a long-time friend. Reza thrives in the social environment of his restaurant, and caters meticulously to every individual client. The consistent hospitality is an experience quite unlike any restaurant I have ever been to. The food is also incredible. The lamb, chicken and beef kebabs are a Shiraz specialty, while the “Taste of Life” is a must-have: a mouth-watering stew of chicken, crushed pomegranates and walnuts.

Due to their welcoming owners and delicious food, Prince George’s two Persian restaurants have already made their mark on the city’s culinary scene. For me, making the move to Prince George has not meant sacrificing amazing food from around the world. It is quite the opposite.