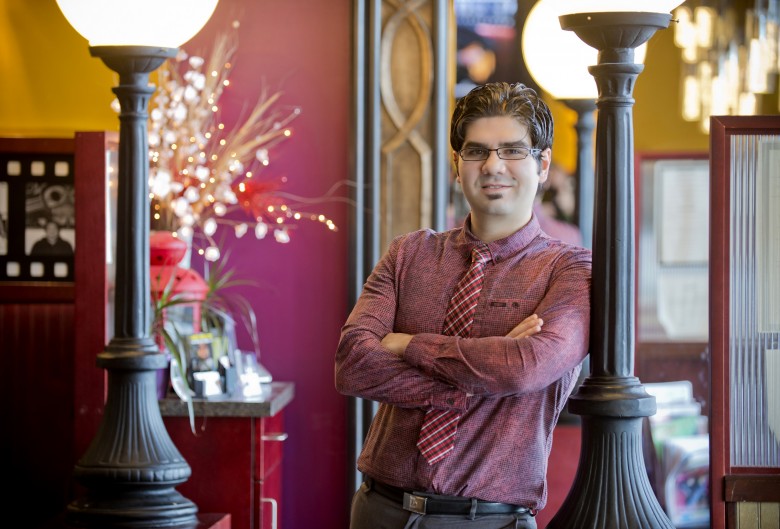 Some restaurant owners become popular for their cuisine and ambience. Reza Akbari has become legendary. His trophy case is getting cluttered with all his accolades since opening Shiraz five years ago, and the word-of-mouth affirmation is hurricane force.

Shiraz itself would seem an impossible dream in Prince George until only recently, but Reza sensed the population would support a Persian dining spot, and his business acumen was correct.

Reza is not a Canadian by birth, moving here about 15 years ago into this culture far different from his Middle Eastern upbringing. He plunged into higher education, learning the principles of business in UNBC’s marketing program (he is now pursuing an MBA there). He also worked for Coca Cola and Bacardi as a highly successful sales agent in this region. He applied this foundation to his business plan for a restaurant.

For his trouble he has won multiple top categories at the Chamber of Commerce Business Excellence Awards, achieved a 2015 “Best Service Award” from Trip Adviser, was nominated as one of the Top 4 Immigrant Entrepreneurs in B.C., and many other accolades.

“Throughout my professional career I have worked to always improve and empower my team,” he said. “I believe this is the key to success and growth. As a matter of fact, in addition to all the achievements Shiraz has accomplished, I have been involved in building a logistical partnership with Canada’s popular national brand Blossoms Fresh Fruit Arrangements.”

He is also a lover of the arts. He is a board member of UNBC’s campus radio station CFUR, was a photographer and editor of the UNBC newspaper Over The Edge, and at Shiraz he provides a stage for weekly concerts featuring local and visiting musicians.

He also got elected to the Chamber of Commerce board of directors which only adds to the endearment the city feels for this ambitious and visionary entrepreneur.