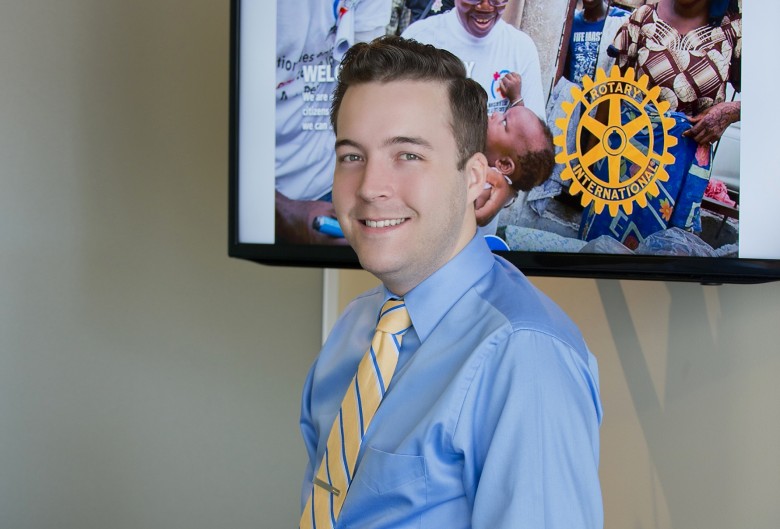 Ross Birchall grew up on Vancouver Island, then came here to attend UNBC in 2007. Since then he has become a force for the Prince George way of life – everything from public health to economic development to kids’ hockey.

“I am continuously humbled by and appreciative of the City of Prince George and its people, and am proud to call it my home,” he said.

Here he founded Wellesley Consulting Group – a business development and marketing firm – that now has an active presence in Vancouver and Victoria. WCG was nominated for five trophies at the 2015 Chamber of Commerce Business Excellence Awards!

On the humanitarian front, Birchall shines even brighter. He is one of the spearheads each year of the Big Blue Ball event raising money for men’s cancer concerns (he is also active with the city’s prostate cancer support group), and he is an extraordinary volunteer with Rotary, winning Rotarian of the Year in 2015.

“A Rotarian since age 10, I was Sergeant-At-Arms for the Rotary Club of Prince George through 2013-14 and I am President-elect for the 2015-16 year,” he said. He also chairs Rotary’s men’s health initiative, and also sat on the PG Hospice Society’s board.

He also connects business with philanthropy by sitting on the Downtown Prince George board to improve the city’s core for the benefit of the whole area.

“He has successfully brought economic development opportunities to the region, such as Google’s Street Views For Business program, and served on several committees focusing on tourism and hospitality,” said one of Birchall’s supporters.

He is comfortable chairing meetings, advocating to government, commentating on radio, or doing the mundane but important work of selling raffle tickets.

When someone is willing to see even the smallest task through to completion, be that in business or in charity, that becomes a valuable asset to the entire community.