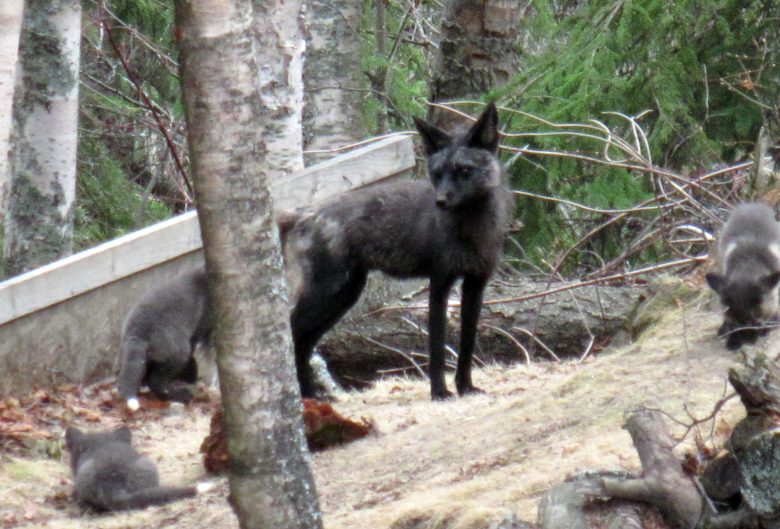 A couple of nights ago I was out for an evening ski with a friend of mine, and we stopped for a rest near the top of “Night Rider”, one of the fabulous cross-country ski trails at Otw 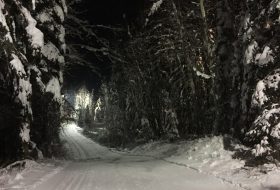 ay. While reminiscing to my friend about a crash that I’d survived near this same spot last year, a movement caught my eye just within the shadows that projected from one of the bright lights that turn certain ski-runs into a magical place most evenings. As I focused toward the movement, a white-tailed buck walked into the light followed by, a beautiful doe. I stopped my story short as we both stood there, still panting from the skiing, and watched as the deer wandered slowly back into the shadows.

We concluded our ski a short while after the deer encounter. After dropping off my friend, I turned the corner near my home and again saw something stirring within the shadows of a streetlight. I slowed down as I approached the movement, then out into the light came a lovely gray, brown and black coloured fox, trotting confidently across the street. Upon reaching more shadows on the other side of the street, the fox sat down and watched me roll slowly by.  I couldn’t help but admire just how thick and beautiful she grew 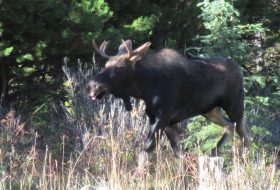 her fur coat to endure the winter chill.

Two wildlife encounters in one night in Prince George doesn’t necessarily happen that often, but I wouldn’t say it is rare. Ask anyone in Prince George, and they will tell you about the deer they saw last week, or the moose up on University Hill, or the bear cubs they saw eating grass on the side of the road last spring. As a small city surrounded by forests, rivers, lakes and mountains, Prince George is shared by all manner of animal species, not just the two-legged variety. Of course there is always the problem of animal habituation, where wildlife start to become used to the presence of humans, but a common regard for each other has developed over the years and Prince Georgians have learned to adapt and respect their wild neighbours. 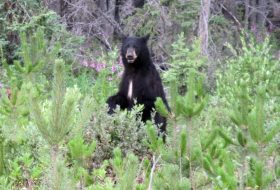 Last fall while mountain-biking the trails around Forests for the World on a brisk Sunday morning, I turned a corner and was startled to see a large black bear standing there, staring at me in a curious manner. Understandably, I stopped my bike and got off, instinctively positioning the bike between myself and the bear. For some strange reason I spoke to the bear, asking him “what are you doing on the trail,” but he didn’t answer and just kept staring at me. So, I slowly backed away, turned my bike around and headed off the way I came. In an ideal situation, I should have made more noise as I approached, so that the close encounter could have been avoided, but since it didn’t I had to react in an appropriate way. And that was to give the bear the room and the respect that he deserves, so that we can both share the beauty of Prince George’s natural settings with mutual consideration and admiration for one another.