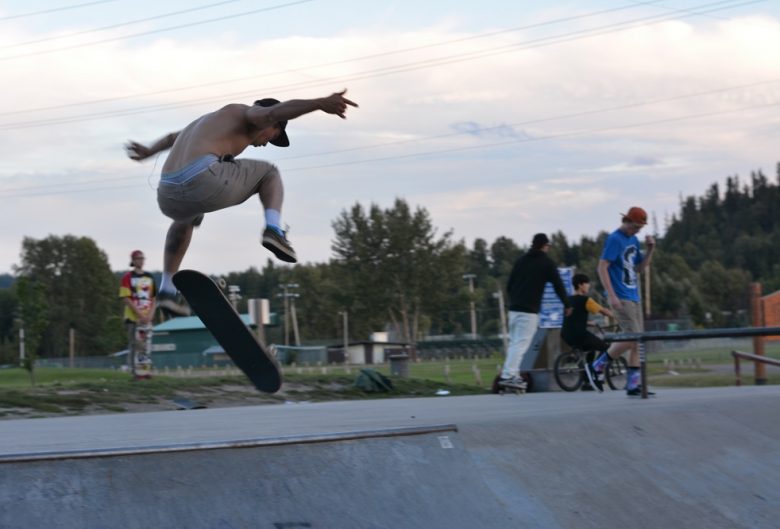 The sound of skateboard wheels rolling along pavement fills the evening air. Young adults fly past each other weaving in and out, some wearing protective gear others hardly anything at all. They make jumps off of beams and half pipes, only to wipe out when their wheels touch the ground. Egos bruised and beaten they get back up and try it again and again. This is the world of the Prince George Rotary Skatepark on Massey Drive.

I went down to the skatepark to speak with Ryan Baker and some other people from a local skateboard team known as C.B.A. I wanted to learn a bit about the world of skateboarding and what it takes to make it in Prince George. I had my own preconceived notions about the skateboarding world here in Prince George, that it was a hobby for most people. I learned that it takes determination and more than a couple of bruises to make 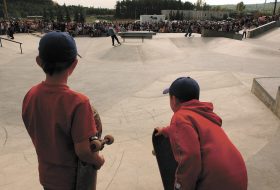 a name for yourself and stand out. In fact, Prince George has a busy skateboarding scene full of all kinds of individuals.

I am surprised it took me 20 years to visit the park for the first time. When I got there I could feel the energy and excitement in the air, and it was only a Tuesday afternoon. People were flying past each other seeming to be completely aware of the location of other people while trying to calculate how to land their next trick. I watched as two young guys showed me the stunts they had been working on all evening. The first trick was a jump off of a 3-foot high ledge. They didn’t land all their attempts, but the ones they did were amazing to watch.

Ryan showed me a stunt he had been working on for a while. Starting at the other end of the park, Ryan blew past me, launching him off a ramp. While in mid-air he did a front flip and landed on another board that was waiting for him at the top of the jump. He attempted the jump a couple of times, each time getting better and better than the last. You could tell Ryan was dedicated to what he was doing because for the average person the kind of falls Ryan took would have sent them home done for the day. However, it did not phase him and he finally executed the stunt and landed it on the other board.

I spoke with Ryan after and he told me that if you want to be part of this world, you ne 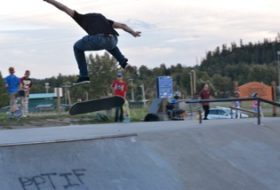 ed to have dedication. You can’t just get into skateboarding because you want to look cool; you have to want to be at the skate park day in and day out. He jokingly talked about how the sport had toughened him up at a young age and after a couple hours with him I can whole heartedly vouch for that. Even though I visited the park to see Ryan, it was full of individuals who were passionate and impressive. Men and women on bikes, boards, and scooters were all out at the park. They ranged from expert to novice, and from young to old.

Prince George has a great skateboarding scene and if you are dedicated and passionate you too can be a part of it. However, this sport is not for the faint of heart, and one must be willing to put in time, sweat and possibly a bit of blood. The reward in the end is more than just looking “cool” doing a stunt, but a feeling of accomplishment that all true athletes feel when they get to the next level. These men and women may look like rough and tough kids, but after spending a few hours with them, I can see they are some of the most dedicated young people I have met in a long time.