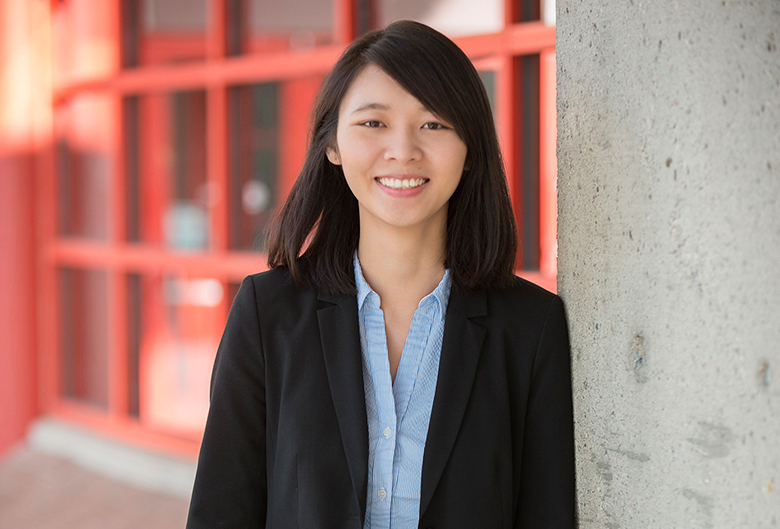 Miley Yang came to Canada from Shanghai to study English Second Language and University Transfer at Langara College in Vancouver, but later decided to move to Prince George to be challenged culturally and linguistically at the College of New Caledonia (CNC). It also helps that Miley is a seasoned traveler, blogger, and emcee.

While at Langara, Miley volunteered with VOLT, the college’s Leadership program. During her time in this program, she assisted with orientation, the student BBQ, and other on-campus student events. Miley joined the Leadership Ambassadorship Program in the fall of 2014 and immediately engaged other students to make a difference both on campus and in the community. Before officially joining the CNC Student Leadership Ambassadorship Program, she coordinated and led the Chinese New Year Celebration in Prince George. She volunteered off-campus at Theatre Northwest, the 2015 Canada Winter Games, the Salvation Army (Christmas Kettle), and with the Prince George Symphony Orchestra (tickets/ushering).

Miley has coordinated students on her team and they all attest to her inclusive, inspiring leadership. Additionally, Miley has participated in, or coordinated, Student Orientation, Turban Up Day, Summer Bash, and Canada Day Celebrations.

Miley was Chairperson for the Chinese Students and Scholars Association, a non-profit organization funded by the Chinese government focused on providing opportunities to Chinese students worldwide as well as encouraging pride in Chinese culture. In May 2015, she was elected as the International Student’s Representative with CNC’s Students’ Union, where she advocated for International students’ rights on campus, ensuring theirs is a global voice and presence. Since being elected, Miley has been responsible for the administration of the Student Food Bank, Lockers, and distribution of U-Pass’s. She recently graduated from CNC with a Business Management Diploma and is currently working at College of New Caledonia in the role of International Student Engagement Coordinator.