It was Prince George in late January, a Saturday afternoon. That means it was around -10 degrees outside, and the snow from the previous few weeks was starting to pile up. In fact, earlier the morning the day of this particular Saturday, I watched the plows drive down my residential street sweeping the thick white powder off the roads and leaving mounds of the stuff gathered on everyone’s yards. I’m kind of curious to see how high these suckers can go. 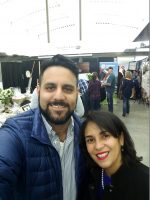 Me and my wife Gloria enjoying Kiwanis AleFest.

Six months ago, I was living in South Texas where heat is the norm and the coldest you can reasonably expect to endure is 4 degrees (heck, I’m not even sure they know about negative numbers down there when it comes to weather, at least). So, if you’d have asked me back then what I’d be doing on a day like this one, the one I’m describing now, I probably would have told you that I’d be bundling up under a blanket in a corner, sipping on coffee while binging on Netflix. But that’s not what I did. No sir. I was fixin’ to go drinkin’. Specifically, my wife and I were planning to drink beer. Even more specifically, the two of us were off to imbibe craft beers – all manner of lagers and ales produced by independent microbrewers that gathered from across the province to share in their love for these fermented alcoholic creations at a well-attended and highly regarded annual event known as AleFest.

Ahhh…AleFest. What can I tell you? It’s more than drinking. It’s drinking for a good cause. The money raised by this event goes straight into the coffers of the local Kiwanis International chapter, an organization that seeks to improve the world by making lasting differences in the lives of children. So, before you get all judgmental about my decision to highlight a beer festival on a blog that’s supposed to encourage people to move to Prince George, know this: it’s not really about the beer. It’s about a community coming together to support local entrepreneurship and raise money for a social cause while having a heck of a good time.

Craft beer from across BC is served alongside food made by local restaurants.

The fact that AleFest occurs in the dead of winter is no coincidence either. Whereas other places might target warmer seasons to host such an event, AleFest embraces the cold and reminds everyone that the true warmth of a community primarily stems from the quality of its people, not the mildness of its climate. In that sense, AleFest provides a quintessential Central BC experience. People here are resilient, generous, and genuinely friendly.

Did you attend the 2018 edition of AleFest? Is there another fun fundraiser you attend regularly? Check out Jes Hoeg’s blog “Entertainment options for everyone” and Tim Bennett’s blog “Filling up your fall social calendar” to jog your memory about past fundraisers and then share your pictures and experiences with us on Facebook or Twitter!