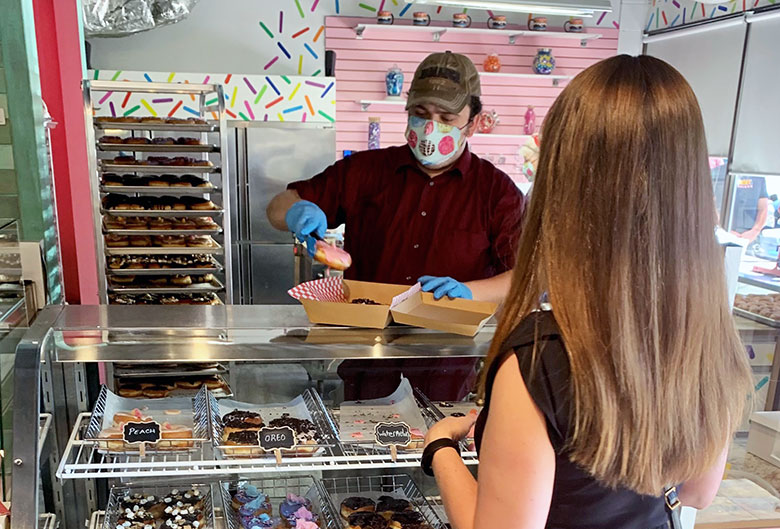 Those who have followed my Move up Prince George blogs for awhile know that I have a bit of a sweet tooth. I have tried hard to cut my sugar intake but indulge in the occasional treat. A few years ago, I posted a blog that highlighted some of our City’s amazing cinnamon buns. I feel it’s time to highlight another local sweet treat that’s started taking centre-stage lately – the doughnut!

Earlier this month Daydream Donuts Café opened on George Street across from The Keg. The owners have created an adorable little café and are offering a fresh take on doughnuts. Everything is made from scratch in house, and while there are so many to choose from, the Bumbleberry jelly filled and the Lemon Drop were the favourites of my team who had the tough job of sampling.

Over the past year, we have seen a few new players in the local doughnut scene. One of the newest is Glazed. The owners of this business previously ran the Bears Paw Café located in Wells. The owners have relocated to Prince George and have opened a doughnut food truck.  Based on the photos I have seen the doughnuts look amazing. They have a dish that kind of looks like a doughnut hole poutine. It’s the first thing I am going to try when I am able to pay them a visit. You can find them at the Wilson Square Farmers’ Market every Saturday.

A different take on doughnuts that’s worth the hype

Over the past couple years, there has been a lot of talk on social channels about a new take on a traditional deep-fried bread that’s worth the hype. The House of Ancestors located on 3rd Ave has taken it’s delicious bannock and covered it in a variety of toppings to make what has been dubbed “bannock doughnuts”. Bannock is delicious by itself, so you will have to try this creation to see how much more tasty it is with toppings. I have tried many of them and the apple cinnamon has definitely been my favourite. Can’t find an apple cinnamon one? Any of the fruit glazed ones are a very close second. They offer regular and vegan options. 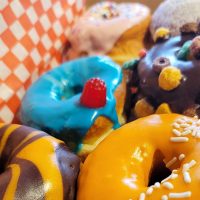 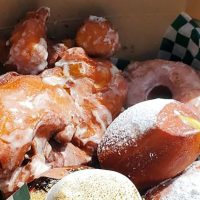 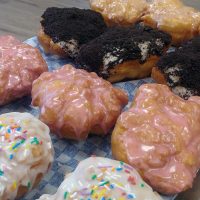 Doughnuts for those with food intolerances, and everyone else

For those who want to sample the tasty doughnut options I’ve listed but can’t because of food intolerances, get ready to do a happy dance because there are several options for you to choose from.

Another doughnut maker you can find at the Wilson Square Farmers’ Market is Black House Bakery. They specialize in gluten free, celiac friendly baked goods, including doughnuts! Choose from flavours including strawberry rhubarb, neopolitan, vanilla chai, lemon fog, and mint chocolate chip. Yum! You can pick them up at the Farmers’ Market or place an order online.

Doug’s Donuts is a home-based bakery that started selling doughnuts at the Hart Market and now sell exclusively via their Facebook page which has a following of thousands. Twice per week, Doug’s Donuts serves up a variety of amazing flavours to Prince George residents. You can also special order by the dozen. Did I mention the doughnuts are plant-based and gluten free? Honestly, would never have guessed.

If you like your doughnuts to look like works of art, head to The Makerie. They serve up a daily doughnut flavour that’s almost too pretty to eat. Almost. Their doughnuts are all gluten, dairy, soy, and nut free, so they’re perfect for the person who can’t enjoy any of the other doughnuts on this list. 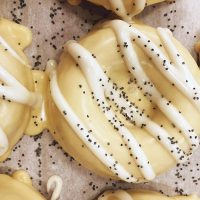 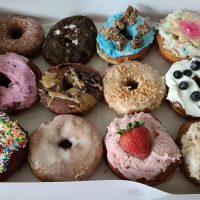 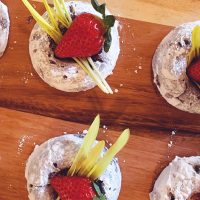 Shout-out to the classics

If you love doughnuts and live in Prince George, you have probaby enjoyed at least one Pastry Chef Bakery doughnut and you know that they are massive. I can’t pick just one favourite as they are all good. Go in, grab a dozen and try to share. It will be harder than you think.

I also want to give a shoutout to Tim Hortons. While Tim Hortons is a franchise, it’s owned by amazing local residents who give back so much to the community. Over the past year, they have done charity doughnuts for Big Brothers Big Sisters of Northern BC, The Spirit of the North Healthcare Foundation, and Special Olympics BC. Tim Hortons also gives back to every community event. I believe it’s important to give back to those that support our community, so I do occasionally go and grab myself an old fashioned glazed or honey cruller.

As you can see we have a lot of options to satisfy your sweet tooth. So I encourage you to grab a coffee from your favorite local cafe and pop by and try one of these sweet treats. The only question now is, do people still dunk their doughnuts in coffee?